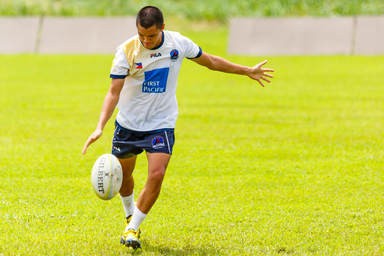 Manila, Philippines: The Junior Volcanoes, backed by First Pacific, are in deep preparations for the U20 Asia Rugby Sevens Championships.

The tournament, hosted by Hong Kong will be held at Kings Park on August 4 and 5. The pools have been announced with the Junior Volcanoes coming into Pool A with last year’s winners Sri Lanka followed by Malaysia, China, and Chinese Taipei. Pool B features last year’s runners up Korea alongside home favourites Hong Kong, Thailand, Singapore, and Uzbekistan.

The national team will be led by experienced Head Coach David Johnston and his assistant, senior Men’s veteran Jake Robrigado Letts, an experienced member of the sevens game. The team has been tucked away in a High Performance Training Camp since Friday for final preparations before departure on Thursday. The national U20s is the PRFU’s youth program designed to develop, identify and up skill national rugby players to be transferred into the national men’s senior program.

Key members Gabriel Lingan, Andrew Rodolfo Baldado and Josh Heredia Miller have been selected back into the program after their performances in last year’s series. The Volcanoes have adopted a youth policy to ensure players are able to participate in the tournament on more than one occasion

“It’s been a productive week for the team, Dave and I have been working closely to ensure the team is best prepared come Saturday. Looking ahead, we want to build this program each year and it starts with a solid foundation this weekend. It’s an important tournament for the Volcanoes and the PRFU. The players have a lot to play for, not only the country, but also selection into the Men’s senior program later in the year” Letts shared.

Joshua Aragon also returns for the Junior Volcanoes, only this time he will compete in a slightly more familiar territory. The Clark Jets representative graduated from the U18 youth program and has had a remarkable rise since. Aragon has already earned his first cap with the senior Men’s team after a standout performance in the SEA 7s last April where the senior Volcanoes finished with a bronze medal. Aragon has since been named in the men’s SEA Games training squad, all before his debut for the U20s.

“I have learnt a lot of extra techniques to step up my game. Having a taste of how high the level of men’s senior rugby is, I think the experience will help me this weekend in Hong Kong” Aragon shared.

The Junior Volcanoes will face Malaysia first in their pool matches, followed by Sri Lanka, Chinese Taipei and finally China, all on the opening day. Saturday will see the teams seeded into a playoff format against Pool B.